I am officially in the clinical range for obsessive-compulsive personality disorder. This is a huge relief. It doesn't change anything about my treatment, but it's good because

1. We know what we're dealing with
2. I don't have bipolar disorder or borderline personality disorder
3. I can stop worrying that I have a brain tumour
4. When I have to write on forms that I have mental health problems, I can write 'OCPD' instead of depression
5. My label is official

I am also officially worrying too much. I got 79 out of 80 on the inventory for chronic worriers, and that was only because I don't worry quite as much about having time to do things because I have a lot of free time what with not having a job

I have 3 more sessions with kathryn, and we're going to work out what I'm going to do after I stop having sessions with her to deal with these two facts. 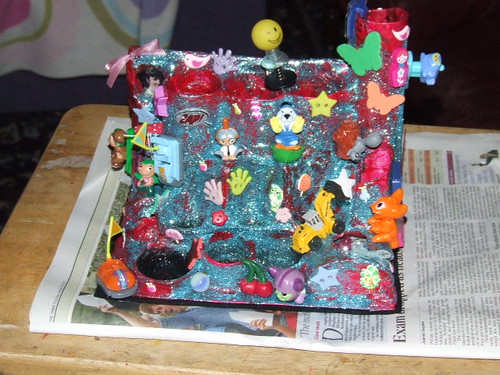 oh my god - the things my brain does are scary sometimes. this is the finished desk tidy for my recycling project. It looked fairly normal yesterday, but then i got a glue gun, a box of old kinder egg toys, and got creative.