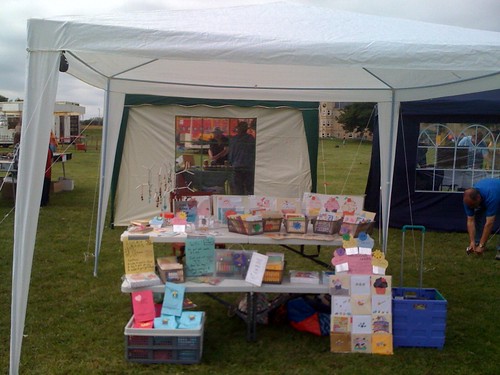 The fun day went well. I was happy with how the stall looked, and I came home with £21.90 - the pitch cost £15, so that's £6.90 profit, better than last time, and also we got 2 falconry shows and a display of some fairly inept baton twirling from some adorable children in questionable costumes.

Mainly sold cards and the lucky bags (little bags with a card, some sweets and a toy for £1), but also sold two tiny canvases to Emily, my biggest fan on facebook, and the most amazing little girl. She came over and bought a couple of cards, and looked at the canvas. Then she wandered off, and came back again, and said 'Your stall is the best one here' and bought the canvas. THEN she dragged her mum over to point out everything she liked. I nearly cried, it was so sweet and just what I needed to hear.

I'd been really nervous and was awake at 5 (although I slept most of yesterday) and then I was close to tears when the stall was set-up. I took my paints so I did 2 small canvases, then rang Ian and asked if he could come and sit with me. He was going to have to come by taxi, because I was in the van, so I felt bad about that, but it was either that or I went home. No one had bought anything, or even looked at my stuff, and I was lonely and feeling crap. He's a wonderful husband.

The falconry was great - the woman who did it was really funny and told good stories about the birds. I'm definitely going to have to paint Ethel the white headed vulture, because her head was pink and blue as well as white. She swooped over our gazebo, and was massive. One of the other eagles flew too far off and perched on someone's roof.
Collapse