I'm "up" this week. Not too far I hope, although yesterday I did have to make myself go to bed as I was trying to do 5 things at once. Ian called me through and asked if I was planning on making us some tea, because it was quarter to 8. I seriously thought it was about 5 o'clock. I gave Ian something, and then ended up eating 2 toast heels (i love that word after reading calvin and hobbes) at about 10.30

So anyway, the five things I was doing....

1. preparing my CV - I went to Next Step to talk to someone about my job options and get some advice. Julian asked me to make a list of all the relevant employment I've done, but i was getting so tied up in making sure it included everything, i was putting in every single thing i've ever done, including the one day i spent delivering mail during the postal strike, and the week i spent making flower baskets at home.

2. sewing elastic into the hem of my skirt so i can make it tulip-y

3. continuing with my CBT workbook, as I've been neglecting it this week, as I haven't felt anything other than happy

4. counting the tsuk feedback (which i actually finished)

5. collecting images from the exhibition I saw online yesterday, printing them out, and sticking them in my sketchbook so i don't forget them. stupid place didn't have an exhibition catalogue, and the one thing i really loved isn't online anywhere. The exhibition was called 'Rank' and was about the changing face of the social order in the last 500 years. There were some really awesome visual illustrations of statistics about the changing face of social class.

Celebrating Friendships
Over the past ten years, many friendships have started and/or been renewed on LiveJournal. Of your current LJ friends, who have you known the longest?
Reply 162

I LOVE YOU, KATIE 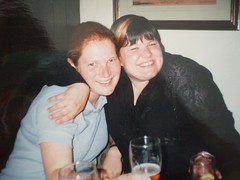