i'm so sick of people fucking whinging and bitching on

thriftstoreuk that it's becoming a proper pain in the arse. seriously, if i don't like it somewhere, i just fuck off. why do people hang around if they hate the rules so much?

i don't know what else we can do, as mods. there's a feedback post, where people can vent their feelings, we're having voting on new rules, changing things according to what people ask for.... and STILL there are people whinging

niceboots , i prefer using that community' - i can't honestly understand why she doesn't just fuck off and use that comm. no one is making her stay.

i personally don't use

niceboots because it's poorly run and people over there take the piss. I've lost about £30 in total over there because people disappear all the time, and the mods don't seem to care when you email them. It doesn't seem as safe a comm to buy on, BECAUSE WHAT FEW RULES THERE ARE AREN'T ENFORCED

Yeah, I know we agree to be mods, and all that jazz, but if we didn't do it, what would happen? the community wouldn't stay alive, and we'd all have to resort to eBay, which would be shit.

i don't see why enforcing rules makes you a nazi either - every rule is there for a reason, it's not for the good of our health. members don't want big pictures clogging up their friends page, so we don't allow big pictures and ask for cuts. members complain when they see the same things over and over, so we have a repost once a week rule, and one post a day rule. ok, not everyone wants tags, but we need them to check on the other rules, and we only ask for the username, nothing else HAS to be added. members asked for tags to be changed, so we changed them, or they ask for them to be added, so we add them

then when they're having a transaction problem, they can't wait to get in touch, to see if you can email them on their behalf. It's all i can do to not tell them to fuck off if it's someone who particularly irks me

*ETA* you may have noticed i'm a bit giddy, but shouty today - today is a score of 3 on my mood chart - here is April so far 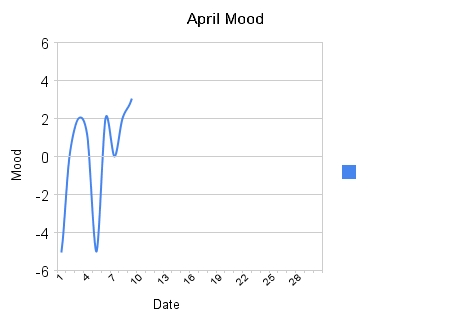 We did another crafty swap, and I got this awesome box of goodness. yum yum yum 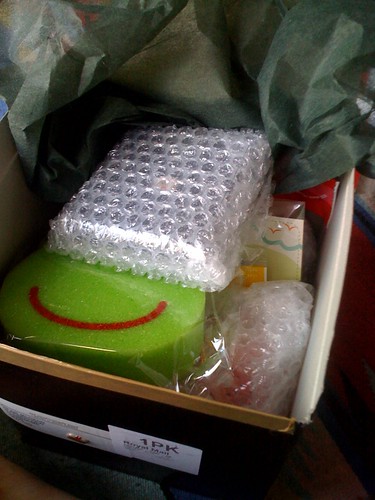